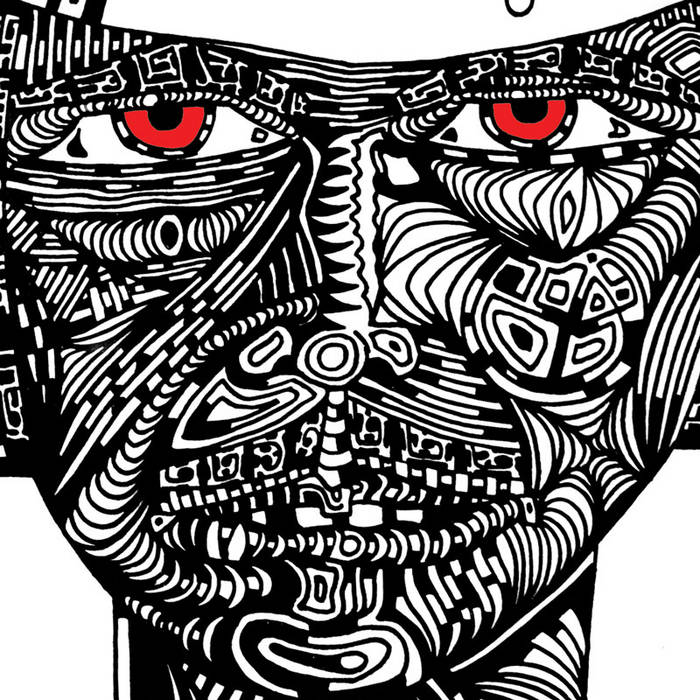 Weird Hug records also sent along their second release (002)....TeePee, a one-man project from Miami.
According to TeePee's myspace this is the first of a bunch of singles coming out as part of the Hozac singles club and on the Florida's Dying label. When a group of people get behind something like this, you know it's got a pretty amazing seal of approval.
Rest easy ordering a couple of these from TeePee's myspace. He's also got a blog I've been looking over...with lots of limited cassette releases and compilations he's contributed to for download.
All the singles, look like they have the same type of cover art...kind of tribal, pen and ink or wodcut drawings. I would worry that it's so calculatedly done like Blank Dogs that it couldn't be good, but trust me, it really stands on it's own...in that genre of solo tortured bedroom geniuses, that I can never get enough of really...at least when they are writing slightly experimental, near pop...now that I think about it, it's like the even moodier side of Owen from Casiotone for the Painfully Alone.
The A-Side, or actually the 'T' side is titled 'So sure that I'....a weird slow oscillating drone sample starts the track off and really never leaves. It's like a sci-fi flashback sound effect or some kind of future jail electric hum...you know, the kind without bars, just an invisible shield. Then a slightly mechanical echoed drum beat comes in with a stripped down, no effects, huge guitar chord melody that repeats throughout. The vocals are slow, spoken and mixed barely audibly with just a tiny hint of melody that follows the guitar...it's minimal, dark, but so listenable...easy to keep flipping over and over.
Lyrically it's mirroring the repetition of the melodies...he says 'So sure that I....married you/killed you/carried you' but practically whispered, I didn't notice the naunce in verse at first.
The 'P' side - MBISO has the usual backing of a drum machine....I just want to point out he seems to be using organic drum sounds...real kicks, high hats....you can just tell it's too on time not to be machine...and there's a little room echo, which sounds like he plays it through a PA to play the track 'live' to tape. It seems like he wants to provide just the most basic rhythm, it doesn't really have changes, it isn't filtered or messed with really in any way. It's admitting what it is: I need a rhythm to work off.
This one is plodding along...really hypnotic....lyrically he's doing the same thing here as the 'T' side: repeat a main idea: "I've seen the way....they touched you/loved you" etc. sung over and over. Steadily, like he's convincing himself.
TP is just a great craftsman at slow catchy guitar melodies. Making something out of nothing...or maybe more accurately willing to let the essence of the song idea come through. It doesn't need too many extra layers. He's not trying to hide behind anything. There's a great section at the end where he's strumming, doubling the drum tempo and he's singing 'oooo wooo oooo'. The whole thing builds up here, completely changing the slow head banging up to this point.
I like this home recorded one man band stuff, it really got me thinking about that single vision and how it can be so great...how the home 4-track, and later computer software really let all of these Brian Wilson's out of the bag. Maybe it's the purity I'm attracted to. The Ariel Pink's and Conner Oberst's that have no choice but to get it down in their audio diary....by themselves, in the middle of the night, quietly, with whatever fits in their room. Even when it's bad it's pretty much good. TeePee is doing that, but definitely live, I don't get the feel he's laboriously punching in tracks and editing each sample, who knows how many takes, or how long to find that sound...it's the sound of playing with yourself live. -7 inches blog